Following last month’s agreement between David Cameron and Scottish First Minister Alex Salmond,  the Scottish Government has now rubber-stamped the SNP’s proposed question for the 2014 referendum on Scottish independence: ‘Do you agree that Scotland should be an independent country?’

The proposed question has yet to be approved by the Electoral Commission. The  Commission’s role in determining the intelligibility 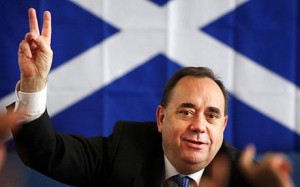 of proposed referendum questions is, strictly, merely consultative. However it would be at best embarrassing for the SNP to ignore the Commission’s recommendation.

Dr Matt Qvortrup, a member of The Constitution Society’s Working party on Scottish Independence and a leading authority on referendums, said last week that in his view the Electoral Commission are unlikely to endorse the proposed question on the grounds that the word ‘agree’ biaised the question towards an affirmative answer.

Earlier this year a group of academics including Dr Qvortrup proposed an alternative, neutral, phrasing of the question which is broadly supported by the opposition parties: ‘Scotland should become an independent state: I agree/I do not agree’

It can be argued that neither version of the question makes it sufficiently clear what ‘independence’ implies. Statements from Alex Salmond and other Scottish ministers in recent months have given the impression that Scotland can be ‘an independent country’ while simultaneously remaining a part of the United Kingdom in important respects.

The SNP’s proposal that the Queen should remain sovereign of an independent Scotland is not controversial: Her Majesty is head of state of a number of former British dominions and colonies which are recognised as fully independent states in international law. However some of the SNP’s  other thoughts on shared UK institutions would seem to present serious difficulties.

Mr Salmond’s view that an independent Scotland would remain in a ‘ sterling zone’ is an example. As is clear from recent comments, he does not mean simply that Scotland would continue to use sterling in the same way that, for example, Ecuador uses the US dollar as its national currency, with no control of its own monetary policy.  He envisages that Scotland would have a say in Bank of England decisions, with its own seat on the Monetary Policy Committee.  Even if a future Westminster government were prepared to concede such an arrangement, it is very hard to see how it might work in practice if future economic conditions or fiscal policies diverged. Other proposals are problematic for different reasons:  for example the SNP view that an independent Scotland would retain the UK’s financial services regulators would appear to be contrary to EU law, which requires each member state to apply its own regulatory regime.

The Constitution Society understands that when possible referendum questions were examined by UK civil servants earlier this year there was general support for a wording which put the independence decision in starker terms: ‘Do you agree that Scotland should become an independent country and leave the United Kingdom?’ *

SNP resistance to a question of this type is understandable: polling evidence suggests that if the question makes clear that independence and remaining part of the UK are incompatible alternatives, support for independence falls by around ten percentage points.

Under the terms of the ‘Edinburgh Agreement’, determination of the referendum question was ceded to the Scottish Parliament, in which the SNP has an outright majority. The quid pro quo was that there should be only one question: i.e. that there should be no second or alternative question on increased devolved powers. Some might say that the Scottish public has been rather badly served by this bargain. In 2014 voters will be asked endorse a form of ‘independence’ which  (so far at least) is not adequately defined, but will be given no opportunity to express their views on the constitutional solution which, according the polls, commands the most widespread support.

*In this context it is worth noting the wording of  the 1973 Northern Ireland Sovereignty Referendum  which made the choice confronting the electorate unambiguously clear. On that occasion, Ulster voters were asked to endorse one of two alternatives propositions: