You are here: Home » Publications » Would the Conservatives benefit from Scottish independence? 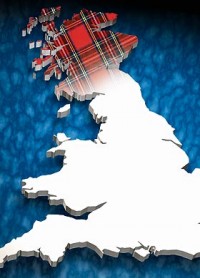 A few weeks ago David Cameron attempted to seize the initiative over the question of Scottish independence by suggesting that the SNP should hold a referendum on this question sooner rather than later. Several reasons have been offered for Cameron’s actions, including the argument that the political and economic uncertainty surrounding Scotland’s place in the Union is bad for business and foreign investment.[1] Perhaps the most intriguing rumour doing the rounds at Westminster, however, is that several senior Tories, including George Osborne, favour an early referendum because they believe it offers the Conservatives a ‘win-win’ situation.

Behind this argument lies a belief that an early referendum is likely to favour the unionists. Polls suggest that support for independence in Scotland is currently low.[2] A referendum held in the near future would therefore probably result in a ‘no’ to Scottish independence.

On the other hand, however, if the Scots voted ‘yes’, and at least one recent opinion poll suggests support for independence is growing,[3] it is felt in some circles that the Conservatives would be the principal benefiters among the UK parties because Labour is far more reliant on Scottish votes than the Tories are. Some have even gone so far as to suggest that the Conservatives would possess an in-built majority in England which Labour would struggle to overturn.

How convincing is such an argument? It is certainly true that the Conservative electoral strength is almost entirely concentrated in England. Of the 59 Scottish MPs who currently sit in Westminster, 41 of these are Labour seats, while only 1 is Conservative. In fact, one has to go back as far as 1955 to find an election in which the Tories won more seats in Scotland than Labour did.[4] Clearly, then, Labour would be at a much greater disadvantage than the Tories as a result of the loss of Scottish seats in the Westminster Parliament.

Nor does Labour’s recent electoral record in England suggest that the Tories would possess an innate advantage there. In 1997, for example, Labour obtained a majority in England alone of 127; in 2001 they had a majority there of 117; and in 2005 they secured a majority of 43.[7] True, in the 2010 General Election the Conservatives won 297 seats in England, compared to 191 obtained by Labour. [8] But this was off the back of thirteen years of Labour government, and the worst recession in living memory.

Admittedly, where a Labour government may have greater difficulty as a result of Scottish independence might be in getting contentious bills passed in Parliament. On two occasions in recent memory a Labour government has had to rely on its Scottish support to help pass bills in the face of a rebellion from its own English backbenchers.

So the argument that Labour would be adversely affected by Scottish independence is not without some merit. But it is also worth considering how the Tories themselves might be affected by it. For one thing, it is by no means certain that Labour’s disadvantage would translate into a significant Conservative advantage. If, for example, the results of the 2010 General Election were repeated, minus the votes of an independent Scotland, David Cameron would have a majority in the House of Commons of 19 seats. An overall majority yes, but hardly a sizeable one.

Of course, the proposed boundary changes would complicate this picture. These are being implemented to reduce the number of MPs sitting in the House of Commons, and to equalize the size of constituencies in order to rectify a current pro-Labour bias in the number of votes required to elect MPs for each particular party.[10] It is expected therefore that the Conservatives would also emerge from this with another slight advantage. But the latest analysis of the implication of these changes suggests that had the 2010 election been conducted under the proposed changes, the Conservatives would have avoided a coalition with the Liberal Democrats, but would still have required the support of their Northern Ireland allies, the DUP, in order to obtain an overall majority.[11]

It should also be recognised that such a momentous constitutional change as independence would be likely to prompt serious changes to what is left of UK politics: changes which may have unforeseen consequences for the Conservatives.

Current representation in Parliament broadly reflects the population distribution of the UK. The English are therefore already dominant at Westminster; and Scottish independence would accentuate this further. The Welsh are particularly concerned about this English domination of a new UK Parliament. The first minister of Wales, Carwyn Jones, has said there would need to be a ‘fundamental rethink’ over the relationship between the three nations left within the UK.[12] One possible suggestion from the Welsh would be to have a new upper house with equal representation for England, Wales and Northern Ireland along the same lines as the US Senate.[13] Under such an arrangement the Tories may find that any majority they have in the House of Commons counts for less than they had bargained for.

Another possible outcome of Scottish independence is that Labour would move closer to the Right in order to increase their appeal to English voters who, it is generally thought, are slightly further along this spectrum than their Scottish neighbours are. Again, such a change may eat into the Conservative’s share of the English vote.

All this suggests that although the Conservatives may not have as much to lose from Scottish independence as Labour, the precise benefits for them are hardly clear-cut. It is certainly not possible to talk of an in-built Conservative majority in England; and Labour has demonstrated in the past that they are capable of achieving a sizeable majority there. Given these limitations, the ‘win-win’ hypothesis seems unlikely to be the motivation behind recent Conservative manoeuvring. Perhaps more credible is the most obvious proposal. The Tory front bench genuinely want to maintain the Union and have floated the idea of an early referendum to wrong-foot Alex Salmond and expose the weaknesses in the independence argument. In the unlikely event that the Scots do rise to the bait, then the Conservatives are betting nonetheless on a favorable result. After all, opinion polls continue to suggest that a referendum tomorrow would vote against independence.