You are here: Home » Publications » Summary of the UCL Public Seminar on the Parliamentary Boundaries Review 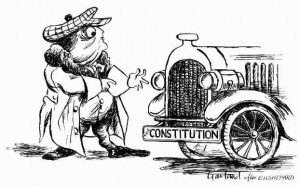 This seminar was conducted by Prof Ron Johnston, Prof Charles Pattie and David Rossiter who presented the findings of their audit of the public consultation phase of the boundary review. All commissions must present their Final Report to the Secretary of State by 1 October 2013.

What fundamental changes were made?

The criteria for determining the boundaries changed from an organic one to an arithmetic one and this fact dominates the kind of transformation that will be seen. In the past the drawing up of constituency boundaries took into account a sense of community and historical connections between places, the new system laid out in The Parliamentary Voting System and Constituencies Act 2011 is defined by mathematical rules. These rules require that all UK Constituencies (with the exception of four) have electorates within -/+5% of the national quota of 76,641. The effects of this mean that it has often been impossible for the Boundary Commissions to keep historically and socially connected areas together.

How much change will be seen?

How did regions fare in comparison to each other?

How did parties fare in comparison to each other?

Were there differences in approach from the separate Boundary Commissions?

The difference in the approaches of the Boundary Commission for Scotland and the Boundary Commission for England were highlighted. While the BCS often chose to break up wards to make new boundaries the BCE preferred to move whole wards to different constituencies rather than split them up. The concept of ‘suboptimally placed electors’ (those electors who were split from their current constituency, ward or local authority and merged into another) was used to measure how many individuals would loose out under each system. In simulated comparisons the BCEs system created more ‘suboptimally placed electors’ than the BCSs system.