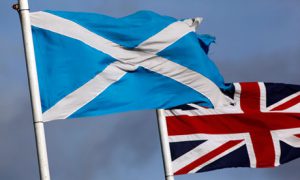 The latest meeting of the All-Party Parliamentary Group on the British Constitution was honoured to have as its main speaker, Sir John Elvidge, former Permanent Secretary to the Scottish government 2003 – 2010.

Sir John opened the discussion of the issues surrounding the upcoming independence vote by: firstly laying out what he believed were three misjudgments about the nature of constitutional change relating to it, secondly stating what he believed were the two most interesting judgments the UK government has made in its wrangling with the independence movement, and finally outlining the most difficult decision the Scottish government has to consider and get right in this process. Following his introduction, the distinguished guest fielded questions from a room full of parliamentarians and interested observers on the nature of the upcoming referendum, its most important developments so far, and where it might go in the future.

And perhaps most intriguingly…

The full audio recording of this meeting can be found here to listen to or download along with a host of other APPG podcasts.

To begin with, Sir John asserted that the oft-cited views: that a devolution settlement would have put the independence debate to rest, that one could construct an electoral system to make it unlikely one single party could gain enough of a majority to push through independence, and, even if this was not the case, that one could draw up legislation legally depriving a powerful majority government of the powers to pursue independence, were evidently mistaken. Were any of these things true, the speaker pronounced, then we would not be where we are today.

Sir John then went on to explore the tactical decisions of the UK government to not challenge on a legal basis the very right of Scotland to vote for its own independence, and also to push for a Yes/No vote rather than including a third DevoMax option. In the case of the former it showed the government’s unwillingness to get bogged down in a drawn-out public debate that they recognised would be difficult to win, and in the case of the latter it represents a large, though considered, gamble on their part, not to take what may be seen as the lesser of two evils through the fear of full Scottish independence.

On the part of Alex Salmond and the Scottish government, the decision to hold the referendum in the autumn of 2014 was identified by Sir John as being their most difficult: drawing attention to Mr. Salmond’s knowledge of horse-racing and his astuteness as an economist, the speaker emphasised how such a date would have been built upon carefully considered predictions of the possible mood of the Scottish electorate at this time, based upon the multitude of factors not ‘written on the ballot paper’, that may sway the decision, not least in relation to the performance of the UK economy. Indeed what many would argue was a ‘perfect set of circumstances’ for Scottish independence against the backdrop of the recession now appears less certain in large part due to the uncertainty of the outlook of the economy.

In general Sir John characterised the debate as being between two political entities both looking not to engage with and resolve every issue on the table because they want to ‘leave room for manoeuvring’, politically speaking, after the referendum. Beneath the public and more populist face of the debate there is an active body of academics trying to unravel and make clear highly complex issues surrounding the debate about the operation of government and state. Finally, whilst the Scottish government parliament has set up a ‘very good framework for civil debate’, what both governments are concerned about and what ‘the Scottish people’ are concerned about, is not always the same thing.

Responding to the question of whether the decision to lower the voting age in the referendum to 16 was a miscalculation, based upon some recent polls which suggest this age group are less likely to vote for independence than their older peers, Sir John said the SNP would have made the decision based upon the assumption that younger people are more idealistic and open to ‘visionary change’; that they would probably not be too concerned with the polls yet, and in any case he doubted it would end up being particularly decisive.

When asked how much he considered the vote an emotional decision for most of the Scottish electorate or a more objective one, the speaker said he would ‘hesitate to guess’ on the proportions of the population who held each of these variables in primacy but that in referenda in general, the closer one gets to the date of the vote the more people look at the economic ramifications of each option; their decision often based upon their own economic situation, both in a purely selfish sense and as a basis from which to gauge the wider nation’s wellbeing. Certainly both sides of the debate are postulating their arguments largely with an economic focus: arguing whether in this globalised economy it is better to be a smaller, more efficient nation or a larger country, more secure from the markets ebbs and flows and whether or not the UK government helps realise or hinders Scotland’s potential. Again Sir John emphasised the central importance of the performance of the UK economy up until September 18th, also mentioning the potential influence the worlds’ leading powers, who have no desire to see another economically inefficient state dragging down global growth, may have on the decision.

In attempting to scale what he considers the Scottish nation’s priorities, Sir John put defence at the bottom of the list due to the relative stability and safety of Europe at present. Changes to pensions, despite the amount of time and energy that civil servants and political analysts are rightly putting into the subject, is another area that Sir John considers of a typically lower priority in voters’ minds when considering an independence referendum, although this may change closer to the vote when more reports are published on the subject. The current debate over EU membership is another thing which may have some impact, the anti-EU movement being a largely English phenomenon and an independent Scotland would almost certainly look to maintain at very least it’s links with the EU, though how much this will actually affect Scots’ decisions to vote on the day remains to be seen.

Questioned on whether DevoMax might end up being a reality after all if the vote is split by way of a compromise, Sir John agreed, saying that if the majority vote ‘No’ he would be surprised if there wasn’t some further devolution in the future, and going on to say that actually such a split vote is what many analysts fear the most. A definitive outcome either way, meaning stronger general popular consensus and a stronger government, would arguably be preferable to a divided nation, independent or not, in which resentment regarding the outcome could be held by one half of the population towards the other.

Other topics covered were the likelihood of dual citizenship (UK and Scottish) in the case of independence, something the speaker considered likely given that both governments seemingly would want it, and also what would become of Scotland’s continuing investment in renewable energy once the UK’s feed-in tariff is no longer viable, which Sir John believed the SNP would definitely continue to pursue under a different funding framework, given their strong belief in the strengths of Scotland’s natural advantages in this area.

Finally, when asked how seriously the prospect of the separation of The Orkney, Shetland, and Western Isles from the Scottish mainland should be taken in the event of a ‘Yes’ vote, Sir John said the eventuality should not be written off. The future of the islands was certainly a large feature of the debate in the 1970s, in particular given their natural oil resources, and ‘if Greenland can separate form Denmark there is no obvious reason to consider the idea absurd’. The speaker then pointed out that once you’ve opened up the principle of deconstructing the UK, it’s not obvious that there is any line at which it will stop.