You are here: Home » Publications » Labour and the electoral system: The myth of defeat and the chimera of victory

The political commentariat comprehensively failed to predict either the Conservative victory in the May general election or the emergence of Jeremy Corbyn as the eventual victor of the Labour leadership contest. Following a perhaps inappropriately brief period of reflection, the mainstream media have lighted on a consensus interpretation of these events which many in the Parliamentary Labour Party apparently share. Two soundbites of received wisdom now seem to frame most conversations about the result of the general election and the future of the party. They can be summarised succinctly:

An analysis of the electoral arithmetic provides very limited support for either proposition.

It is clear that many swing voters in May distrusted Labour on economic policy and were unconvinced that Ed Miliband was a credible Prime Ministerial candidate. It is also very likely that, as the campaign progressed, significant numbers of undecided voters were spooked by the possibility of minority Labour government sustained by SNP support. However while these issues may have cost Labour some marginal seats in England, they are not a credible explanation for the Conservatives’ unexpected outright majority.

The surprise result of the 2015 general election is almost entirely explained by the collapse of the LibDems and the triumph of the SNP in Scotland, which was mainly at Labour’s expense. The policy debate between the two main parties – in reality fought on very narrow ground – had only a weak influence on the outcome.

The chimera of victory in 2020

As things stand, it seems very likely that the SNP will again win nearly all the Scottish seats in 2020. If so, Labour would need – with the current constituency boundaries – to win around 90 additional seats in England and Wales to achieve an outright majority. The LibDems have only 7 seats left to lose, so most of these would have to be taken from Conservative incumbents, which would require an extraordinary swing. However the hill that Labour will actually need to climb in 2020 is steeper still.

In 2018, constituency boundaries will be redrawn in accordance with the provisions of the Parliamentary Voting System and Constituencies Act 2011. The total number of seats will be reduced from 650 to 600 and the new boundaries will be drawn so as to equalise the number of registered voters in each constituency within narrow margins. These calculations will be performed using, for the first time, electoral rolls which are the product of Individual Electoral Registration (IER). As Lewis Baston has demonstrated (1), these changes will almost certainly work to Labour’s electoral disadvantage, to a material but currently unquantifiable extent. The cut in the number of parliamentary seats will fall disproportionately on urban constituencies in England and Wales – Labour’s heartland – while IER will aggravate the social bias of the electoral registers.

The future is of course unknown. It is possible that the Conservatives will split over Europe and go into the 2020 election as two separate parties. It is even possible that – IER notwithstanding – citizens who do not normally vote, and those eligible to vote for the first time, will turn out for Labour in sufficient numbers to swing the result.  However these scenarios are at the extreme outer edges of probability, and, in the absence of some extraordinary event, Labour will almost certainly once again win significantly fewer seats than the Conservatives in 2020, whatever the party’s economic policies and whoever is leader.  An outright majority seems entirely beyond reach.

The voting system and the result of the 2015 election

In the era of two-party politics, the First Past the Post (FPTP) voting system, while unfair to smaller parties, could be defended on the grounds that it produced strong single-party governments.  In the new era of multi-party politics, FPTP generates outcomes which must seem merely perverse to many voters. At the same time, as Vernon Bogdanor has shown (2), the system increasingly tends to exaggerate geographical political differences, most obviously in the 2015 general election by over-representing Scottish support for the SNP. The table below shows how the share of the national vote achieved by the six major parties in  2015 translated into parliamentary seats. 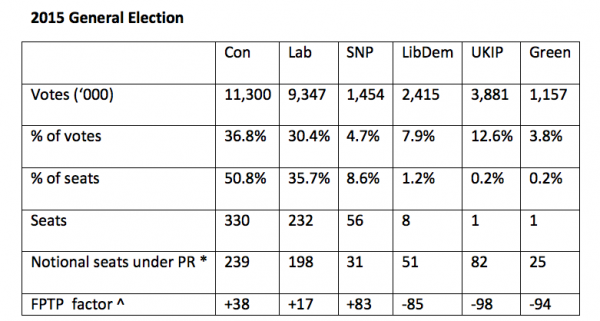 In the table, Notional seats under PR shows the number of seats each party would hold in the current parliament if the allotment of seats were directly proportionate to the percentage of votes won. (These numbers assume a single UK constituency and thus do not represent the seats which parties might win under any likely actual PR voting system. Additionally, voter behaviour would be likely to change under PR in unpredictable ways.)

FPTP factor quantifies – in a rough-and ready way – the relative advantage or disadvantage each of parties enjoys under FPTP by measuring the difference between percentage of votes won and percentage of seats won in May 2015. This analysis is capable of significant refinement but nonetheless clearly illustrates the strongly distortive effect of a FPTP voting system in a multi-party environment.

For fifty years, FPTP operated to the advantage of Labour and the Conservatives in roughly equal measure, and to the obvious disadvantage of the LibDems and their predecessors. Proportional Representation was mainly a Liberal cause: successive Labour leaderships, whatever their private intellectual misgivings, had a very strong interest in maintaining the current voting system.

Until 2015, electoral defeat never led Labour seriously to question the electoral system, because future victories under the same system always seemed possible.  If an outright Labour majority is now thought to be unachievable under any likely circumstances, many in the party may begin to challenge that logic.  If the only foreseeable future government of the left is a Labour-led coalition, the argument which has sustained the party’s historic support for FPTP is fatally undermined.

What would follow if the Labour leadership were to conclude that a change to a different voting system – either AV or some form of PR –  was now in the party’s interests?  To state the obvious, Labour must win power under the existing electoral system before it can change it.  It is not a battle Labour can win alone, but nor does it need to be won alone.  The three ‘minor’ parties committed to electoral reform – LibDems, Greens and UKIP – won over 7 million votes in the 2015 election. A one-off electoral pact with some or all of these parties in 2020, with a common manifesto commitment to introduce an a new voting system, would likely result in a broad-left coalition government.  The alternative for Labour may be a generation in opposition.

(1)    Baston L (2014)  Electoral Collision Course? The Boundaries and the Register after May 2015. The Constitution Society

(2)    Bogdanor V (2015)   The Crisis of the Constitution: The General Election and the Future of the United Kingdom.  The Constitution Society