You are here: Home » Publications » How not to ‘do’ constitutional reform 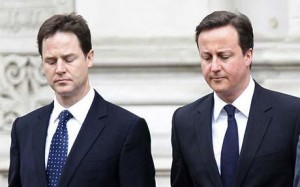 The latest Coalition fall-out over Lord’s reform has highlighted the way in which constitutional issues can easily turn into a game of political football. Booted between the Coalition partners, a decision of crucial importance on how we run our democracy has descended into short-term politicking.

A turnaround from a principled stand in favour of boundary changes to opposition marks a new low in how constitutional issues are addressed. The debate on whether AV or Lord’s reform was the price of reducing the size of the Commons misses the point entirely – constitutional changes require scrutiny and well-thought out legislation, not horse-trading and tit-for-tat.

While there are principled reasons for and against specific changes on either side of constitutional debates it is frankly depressing how these have often been quieter than discussion of partisan advantage. From arguments within Labour as to whether AV would benefit them or not to the quid pro quo agreement in the Coalition that AV would benefit the Liberal Democrats and boundary changes would benefit the Tories.

Advantage will sadly always be a factor, but when it comes to binding constitutional matters overt partisanship damages democracy. A believer in FPtP shouldn’t be swayed by thinking their party would benefit from a change nor too should someone happen to agree with the boundary changes because it makes their local election campaign that bit easier. Nowhere are principles more needed than in constitutional legislation – because in decades to come their consequences will still be felt.

Regardless of how disciplined Tory backbenchers should be (or not), changing key policy in response to a failure to get what one wants brings into question the entire motivation for all of the constitutional commitments of the Coalition. It’s not good for politics. Either the Liberal Democrats supported boundary changes or they did not.

Believing in a ‘smaller state’ is one thing but reducing the size of the Commons to return twenty fewer Labour MPs would be entirely the wrong motivation for boundary changes. So too, wanting the executive to be held to account by a larger Commons is a valid principle for defenders of the status quo –making it easier for Labour to win is not.

Questions must be asked as to why AV merited a referendum but Lords reform, elected police commissioners, fixed term parliaments and a reduction in the number of MPs representing constituents did not.

A side effect of coalition is the fact that rather than one party seeking to gain short term advantage we have two. Two parties that know they will have to face each other in the next general election and are jostling for an upper hand. The internal strife played out in public shows the huge importance that we should place on constitutional legislation and the scrutiny we attach to it.

This turns a spotlight on to a whole range of sweeping constitutional measures that have been put through parliament with less scrutiny than they perhaps deserved. Both fixed-term parliaments and adjusting the confidence threshold start to look decidely partisan when it becomes clear that party advantage is a possible motivator in constitutional changes.

Clegg’s move exposes the disparity in approach to different constitutional legislation and shows the naked party political horse-trading that often, depressingly, marks such changes. It gives credence to The Constitution Society’s call for a special standard of scrutiny to be used for all constitutional legislation. Change, or defence of the status quo, should never be about benefitting a political party, these issues transcend such pettiness and go to the core of what our democracy is about.

Anything that fundamentally changes the nature of how our democracy functions requires careful thought, heavy analysis and due diligence. To approach such issues in any other way can only undermine democracy and leave pitfalls for the generations that follow us. The horse-trading between the Coalition partners should be a lesson to us all in how not to ‘do’ constitutional change.

James Hallwood was Project Manager of The Constitution Society and wrote in a personal capacity.