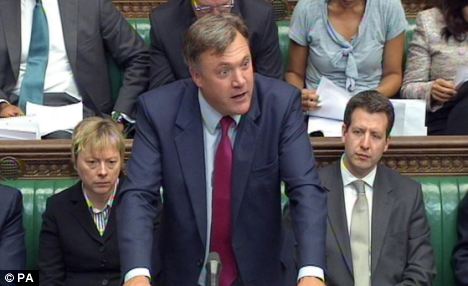 In a Parliamentary session on standards in the banking industry the Shadow Chancellor, Rt Hon Ed Balls MP, called for a judge-led inquiry into the Libor rate-fixing scandal citing The Constitution Society’s groundbreaking research into the power of Select Committees.

Highlighting some of the key findings of report authors, Richard Gordon QC and Amy Street, the Shadow Chancellor said:

“We should consider the recent experience of the phone hacking scandal and all the deliberations we see in, for example, the very important report on the details and reality of Select Committees and coercive powers, entitled “Select Committees and Coercive Powers—Clarity or Confusion?”, from The Constitution Society.”

He continued: “The problem is that Select Committees, in the modern legal world, just do not have the same powers in law to force witnesses to attend or to give evidence on oath, and nor do they have the necessary sanctions.”

The report, that has been hailed by all sides of the House, has continued to gain prominence in light of the rate-fixing scandal with the Clerk of the House saying; “The Constitution Society’s recent study by Richard Gordon QC and Amy Street, one of the best considerations of the issues I have seen”. An article by Sue Cameron in the Telegraph refers to it here while the BBC covers the issues surrounding Select Committees with brief interviews with Amy Street and Richard Gordon QC here.

A full transcript of the discussion in Parliament is here and a copy of the full report can be found here.

While we welcome the use of our research, our work is entirely non-partisan and we take no position on whether a judge-led or Parliamentary inquiry is appropriate.

The Constitution Society will continue to engage with Parliament on the important issues surrounding the powers of Select Committees, remaining committed to good and clear processes for the better running of our democracy.