You are here: Home » Publications » Tuition fees – the tangible impact of constitutional reform 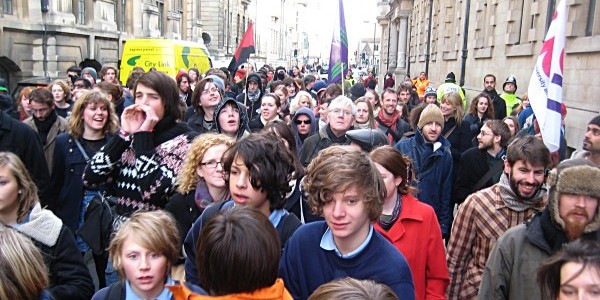 Amid sit-ins in London, Cambridge, Leeds, Plymouth and Edinburgh, kettling in Whithall and threatened rebellion in Westminster, MPs voted yesterday to raise the cap on tuition fees to £9,000 a year from the current £3,290 for students starting university in September 2012.

The debate surrounding the policy is inevitably emotive given the size of the demographic (50% of all school leavers and their families) which will feel its impact first hand.  Heightening the sense of injustice for many was the recent statement from the Welsh government that they would follow the Scottish Parliament in protecting their own students from any increase in fees authorised by Westminster, as well as subsidising students from elsewhere in the European Union.

The tangible face of devolution

Choosing to prioritise higher public spending in health and education, the devolved governments have provided wider access to medicines on the NHS and cheaper higher education opportunities, making their citizens the envy of many English residents across the border.

Instigated in 1997 on the basis that it was unfair for a centralised government in London to make blanket decisions affecting all regions of the UK indiscriminately, many now argue that devolution has forged a UK public services apartheid, with access entirely determined by postcode.

The Government victory in the vote means that students redisent in England will face increased fees of up to £9000 from 2012, regardless of where they study in the UK.

In Northern Ireland, a decision has yet to be taken but it is expected that the Assembly will keep the increase well below the 300% hike planned for England.

A case of spending priorities

The varying fate of students across the four regions of the UK has wounded many commentators, claiming that the policy punishes the English.  The education spokeswoman for Plaid Cymru, Nerys Evans, points out that these differences are in fact a natural consequence of devolved government; “Politics is about priorities and this is a priority for us in Wales.”

The funds for the Welsh Assembly student grants will come from cuts to the teaching grant for Welsh universities and the Welsh Education minister Leighton Andrews’s reference to the “funding gap” between Welsh Institutions and those in other nations in the UK demonstrates that the policy will not be entirely unproblematic.

In order to ensure its sustainability, the Assembly also plan to cap the level of student recruitment in Wales; a decision at odds with Westminster’s intention to encourage successful universities to expand.

The Coalition have begun to make progress in their move towardsincreasingly autonomous devolved government.

A Welsh referendum next March will ask if their national Assembly should have primary legislative powers akin to those of the Scottish Parliament.  Concurrently, the Scotland Bill has been introduced in order to implement the recommendations of the Calman Commission.

Leading to increasing areas of policy separation between the four UK regions, the continued trend of devolution has problematic implications for the operation of Westminster.

The West Lothian question refers to the apparently unfair situation whereby MPs representing constituencies in Wales and Scotland are able to vote on matters which only affect people resident in England.

The discrepancy is a direct consequence of devolution and will become increasingly significant with the expansion of policy autonomy in the devolved regions.

The debate to be held, then, is not whether English students are being unfairly treated as compared with their Welsh and Scottish counterparts but whether the UK is willing to accept increasingly separate state structures across its four component regions.

If the response to the latter is affirmative, inevitably calls will strengthen for a reflected change in its overarching representative institution in Westminster.