You are here: Home » Publications » The Government’s view on House of Lords Reform 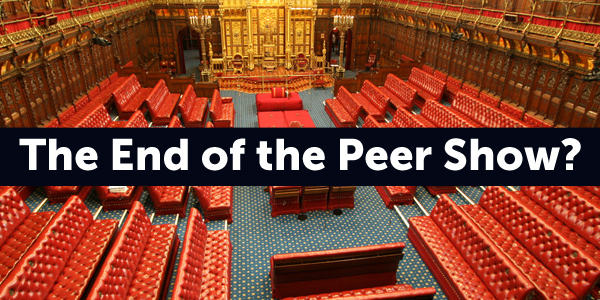 The following is taken from the Constitution Society pamphlet, The End of the Peer Show?, available to download here, free of charge.

The Government believes that people have a right to choose their representatives. That is the most basic feature of a modern democracy.

The House of Lords is well known for its wisdom and expertise.  However, it is undermined by the fact it lacks democratic authority as it is not directly elected by the British people.

The Government published proposals on House of Lords reform on 17 May 2011, as a draft Bill and accompanying White Paper.  Consistent with the Government’s Programme for Government, the proposals provide for a wholly or a mainly elected second chamber, with elections using a system of proportional representation. The House of Lords would maintain its current role. It would continue to be a revising chamber, scrutinising legislation and holding the Government to account.

In line with many second chambers around the world it would be smaller than the first chamber. The Government proposes a reformed House of Lords of 300 members who would be expected to attend the House of Lords on a full-time basis when it is sitting.  A House of this size would be able to carry out the same range of work as the existing House. Currently many of its members have outside commitments or do not attend regularly.

Members would sit for a single non-renewable term of three Parliaments.  Single non-renewable terms would enhance the independence of members of the reformed House of Lords.  They would be able to take a long-term view without constantly considering the implications of their actions on their prospects for re-election.  MPs would continue to be accountable to the electorate – a factor which helps maintain the primacy of the House of Commons.

The draft Bill sets out how a chamber which is 80% elected and 20% appointed would work, as this is the more complicated of the options. The accompanying White Paper does not however rule out a wholly elected House of Lords if there is a consensus for that at the end of the scrutiny process.

The Government is committed to a system of proportional representation (Single Transferable Vote) for elections to the reformed House of Lords.  Proportional representation systems are based onmulti member constituencies. They allow the number of seats gained by each party to closely correspond to the number of votes cast for that party at an election. The Government believes that a proportional system will help the reformed House of Lords perform the same role as at present, but with clear democratic legitimacy.

The Government proposes that the multi-member Electoral Districtswould be recommended by a panel of independent experts.  The district boundaries would be permanent with the number of seats reallocated every 15 years according to electorate.

If the House of Lords were to be 80% elected, a statutory Appointments Commission would handle nominations of the 20% appointed members, who would be expected to be non-party political.

If the House were not wholly elected, there would be a continuing role for some Church of England Bishops, eventually reducing to a maximum of 12 in number. They would not count towards the 20% appointed members, but would be supernumerary.  There would be no other specific religious representation.

The draft Bill does not spell out how the members would be chosen; it is left for the House of Lords and the parties to decide. The White Paper includes two other options – reducing the House to its final size of 300 immediately, or allowing all existing members to remain until the third group of elected members arrive.

Primacy of the House of Commons

Much of the debate following the publication of the draft Bill and White Paper has focused on the powers of the House of Lords and its relationship with the House of Commons.

Other features of the reformed House of Lords – its size, electoral cycle, voting system, and the terms of its members – would keep it distinct from the House of Commons.

The Government believes that the package of proposals it has put forward will give the House of Lords democratic legitimacy, but enable it topreserve the best features of the present House, while maintaining a clear distinction between the composition of the House of Lords and the House of Commons so that they remain complementary.

Mark Harper MP is the Minister for Political and Constitutional Reform