You are here: Home » Publications » Constituency boundaries – joining up the map of reform? 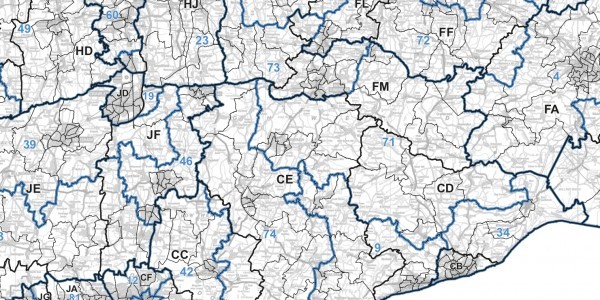 According to the Government “our political system is broken” and “we urgently need fundamental political reform”.

The Coalition Agreement (the Government’s manifesto by another name) therefore groups a series of proposals for change in the paragraph entitled “political reform“, which Nick Clegg later identified as together forming “the biggest shake-up of our democracy since 1832”.

So what is the common thread?

Clegg cites the common goal of a “more transparent and accountable” political system.

From the perspective of proposals to “reduce and equalise” parliamentary constituencies (oft overlooked but radical in their implications), we examine this supposition and apply the mantra of “joined-up” reform.

To recap, what is the current programme for our Constitution?

Draft Bill to be published December 2010.

The proposals affecting constituency boundaries appear to have passed largely under the public and media radar.

Reflecting the structure of the Parliamentary Voting System and Constituencies Bill, media coverage tends to headline AV and include constituency boundaries only as a supporting act.

Electoral reform may be more salient but the proposals to “reduce and equalise” are by no means inconsequential.

Indeed their implementation would radically alter the modus operandi of the Commons, making their interaction with other reform all-encompassing.

What is the current system?

What are the perceived problems?

What does the Bill do?

What are the implications of change?

How do these proposals interact with other pledges for reform?

Fixed terms of 5 years are intended to coincide with the proposed cycle of boundary reviews.  The report of the first review is programmed for 1st October 2013, in time for the general election on 7th May 2015.

Given that boundary reviews under the new rules are very likely to recommend change, this link with general elections means that voters may find themselves in a different parliamentary constituency every time they turn out to vote.Such ambiguity for voters, MPs and party activists is ironic given that fixed-terms are being introduced on the notion that uncertainty in the lead up to an election is damaging and unfair.

The association between elections and reviews also risks being thrown off kilter by an early dissolution.  If this were to happen before October 2013 then a general election would be forced using the current 650 constituencies – and a subsequent (necessarily 5 years later) would be based on constituency data 5 years out of date.

It has been promised that proposals for reform will include measures to directly elect the House but the details (the role of the new House, the size of constituencies, the number of representatives, the electoral system, the length of term etc.) are not clear.  It is as yet impossible to assess the relationship between the reform of the First and Second Chambers of Parliament, only logic dictates that the nature of one should not be decided without knowledge of the other.

Proposals focus on empowering Parliament over the executive, following the recommendations of the Wright Committee.  There are a number of potential inconsistencies here:

The proposals prioritise equalising the size of constituencies in order to better represent peoples’ votes in the Commons.  Yet malapportionment (the technical term for varying constituency sizes) only partly contributes to differences between votes and seats.  If this is really a major concern then why stop here?  As Professor Robert Hazel puts it, “if the Conservatives wanted to eliminate the bias they would need to support PR.”

Tax savings on MPs’ salaries and resources has been argued to be a major advantage of the proposals.  Yet to be calculated, however, are the increased costs associated with the heavier workloads of the remaining 600 MPs and 4 Boundary Commissions.  Further still, the increased administrative cost of split wards and local authorities will remain unclear until at least 2013.

Any merit in joined-up reform?

It is difficult to identify a single process weaving together these necessarily inter-related proposals for constitutional reform, which are instead presented as isolated battles in the Houses.  A loose association in the paragraphs of the Coalition’s agreement or in the rhetoric of the Deputy PM is not enough to dissuade the creeping concern of common sense.  When refurbishing a home, wouldn’t it be better to determine the function of the room before knocking down the walls?