You are here: Home » Publications » AV or not AV? Resources to help you decide 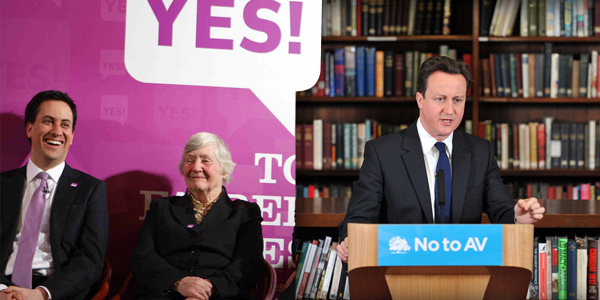 You can vote if you;
(1) are over 18 over on 5 May 2011
(2) are registered to vote and
(3) are either a British citizen, a qualifying Commonwealth citizen or a citizen of the Irish Republic resident in the UK.

At present, the UK uses the ‘first past the post’ system to elect MPs to the House of Commons. Should the ‘alternative vote’ system be used instead?

WHAT HAPPENS IF THE RESULT IS YES:

WHAT HAPPENS IF THE RESULT IS NO:

The review of constituency boundaries will take place regardless.
First Past The Post will continue to be used for all future elections to the House of Commons.

HOW THE SYSTEMS WORK:

The Alternative Vote and First Past the Post are explained here.

Briefing papers on the proposed change and on public opinion towards it are available here.

WHAT IS THIS ALL ABOUT?:

In the UK even landslide majorities can be won on a minority of the national vote (in 1997 Labour received just 43.2% of the national vote and won 66% of the seats in the Commons). This has led many people to feel that our system produces a government that lacks democratic legitimacy.

AV won’t necessarily make a difference to the proportion of the national vote achieved by the party which ends up forming the government after a general election, because variations in turnout from seat to seat may still mean that the party with the most seats is not the party with the most votes nationally (whether in the final round of voting or not). In Australia, which is used as the comparative international example of AV, it is compulsory both to vote and rank all candidates. Neither is the case in the AV system proposed for the UK. The requirement to vote in Australia means they do not suffer from the same distortions that occur in the UK because of varied levels of turnout. Nothing in the UK legislation or the referendum will address the issue of low turnout in general elections.

It is unfortunate that voters are not being given an opportunity either to express their views on FPTP or to show a preference for a system of proportional representation, but only to accept or reject AV. However, it is very unlikely that any other proposals for electoral reform will be brought forward in the foreseeable future and therefore it’s important for everyone to have their say, either for or against, as the general public is unlikely to get another opportunity anytime soon to express their views in a formal manner.

Quotations are underlined, our notes seeking to explain the rationale for the comments are in black.

… Because they will need to fight for the second and third preferences of constituents.

… FPTP is more likely to encourage tactical voting, where people vote according to who they think is likely to win.

… Because parties will probably have to canvass the views of more constituents to secure second and third preference votes.

… Because a winning MP will have to secure 50% of the final round of counting, while FPTP allows a candidate to win with a minority of support.

… AV is preferable to PR, where people do not have an individual MP representing them, but is “fairer” than FPTP, where elected candidates might have been the choice of a minority of voters.

“AV makes lazy MPs work harder and reach out beyond their tribe. It is what Britain needs to clean up politics.” (Chris Huhne)

… Because parties will have to canvass the views of more constituents in order to secure second and third preference votes.

… Even if people prefer proportional representation, they should vote yes to AV as a first step towards change.

… FPTP is simple because it works intuitively; people have one vote and the candidate that wins the most is elected.  Under AV, the candidate with the most votes in the first round doesn’t necessarily get elected (because more second or third preferences might be won by another candidate).

… FPTP makes the big parties more likely to win a majority of seats in the Commons.  It therefore reduces the likelihood of coalition government.

“[AV] will lead… to coalitions, hung parliaments and reducing the influence of the individual voter” (Michael Howard)

… AV will improve the representation of smaller parties in the Commons and make coalition government more likely.  This means parties must change their mandates during coalition negotiations.

… AV is unpredictable because it can be difficult for a voter to know how their preferences are going to affect the election outcome.  It is unfair because the candidate that wins the most votes in the first round of counting might not win overall.

… “Your vote for a mainstream party counts once, while someone can support a fringe party like the BNP and get their vote counted several times.” (David Cameron)

… A campaign of voter education would be required to inform the electorate about the new voting system.